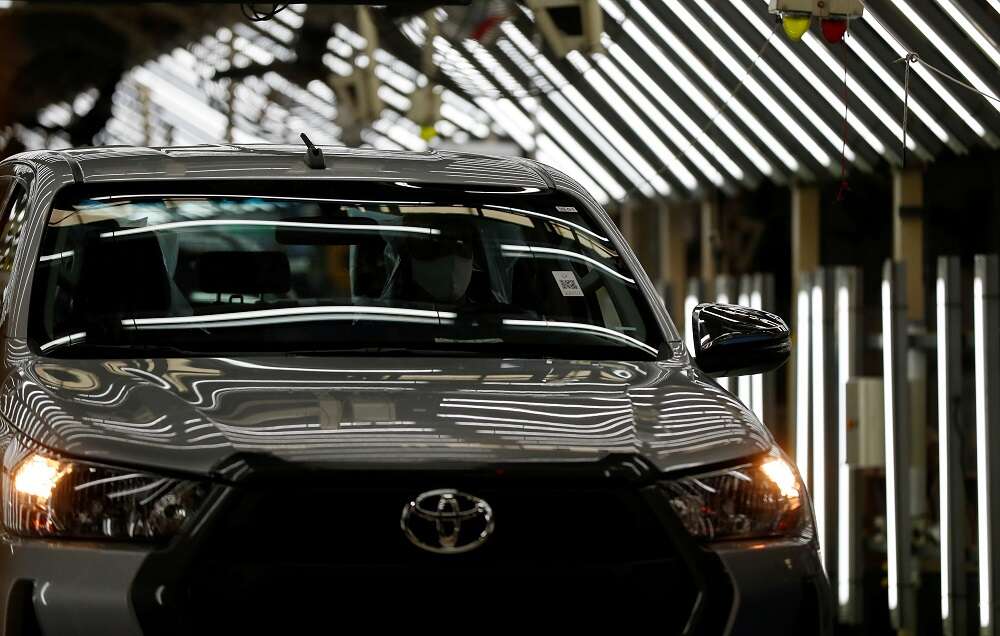 LONDON (Reuters) – In grim warnings this week, major carmakers including Toyota and Volkswagen offered fresh evidence that the auto industry remains firmly in the grip of an ongoing semiconductor chip shortage that shows no sign of abating.

After being forced to close plants last year as the pandemic took hold, carmakers are now facing stiff competition from the sprawling consumer electronics industry for chip deliveries amid global supply chain disruption.

The latest snarl up comes as COVID-19 cases surge in Asian countries home to auto factories and chip plants such as Japan, Philippines, Thailand, Vietnam and Malaysia, leading to stricter curbs to prevent the spread of the virus.

Japan’s Toyota, thanks to a policy of stockpiling chips that dates back a decade to the 2011 earthquake and Fukushima nuclear disaster, had largely managed to avoid production cuts.

But the world’s largest automaker by sales volumes said on Thursday it will slash global production for September by 40% from its previous plan, affecting 14 plants in Japan and elsewhere, including most of its North American factories.

Automobiles have become increasingly dependent on chips for everything from computer management of engines for better fuel economy to driver-assistance features such as emergency braking.

Germany’s Volkswagen also said on Thursday that it couldn’t rule out further changes to production.

“We currently expect supply of chips in the third quarter to be very volatile and tight,” the No.2 volume carmaker behind Toyota told Reuters.

Ford Motor Co said this week it will temporarily shutter its Kansas City assembly plant where it builds its best-selling, profit-driving F-150 pickup truck, while China’s Geely Automobile Holdings Ltd warned the recent worsening of the chip shortage and resurgence of COVID-19 cases could pose a “significant threat” to its sales performance over the next few months.

Although Volkswagen said it expected the situation to improve by the end of the year, some carmakers have warned the chip crisis will drag on into 2022 with earlier industry hopes of a quick resolution long since dashed.

As numerous American auto production lines stand idle, at least part of the time, a trio of Democratic senators asked the Taiwanese government for more help to address the chip shortage, according to a letter reviewed by Reuters.

But even when one kink in the supply chain gets straightened out, others appear, making it difficult to ensure a consistent flow of chips and leaving damage-limitation focused automakers pushing available components to their more profitable models.

“The situation does remain fluid,” General Motors Co Chief Executive Mary Barra said on a conference call on August 4, noting the impact of events such as the current COVID-19 spike in Malaysia.