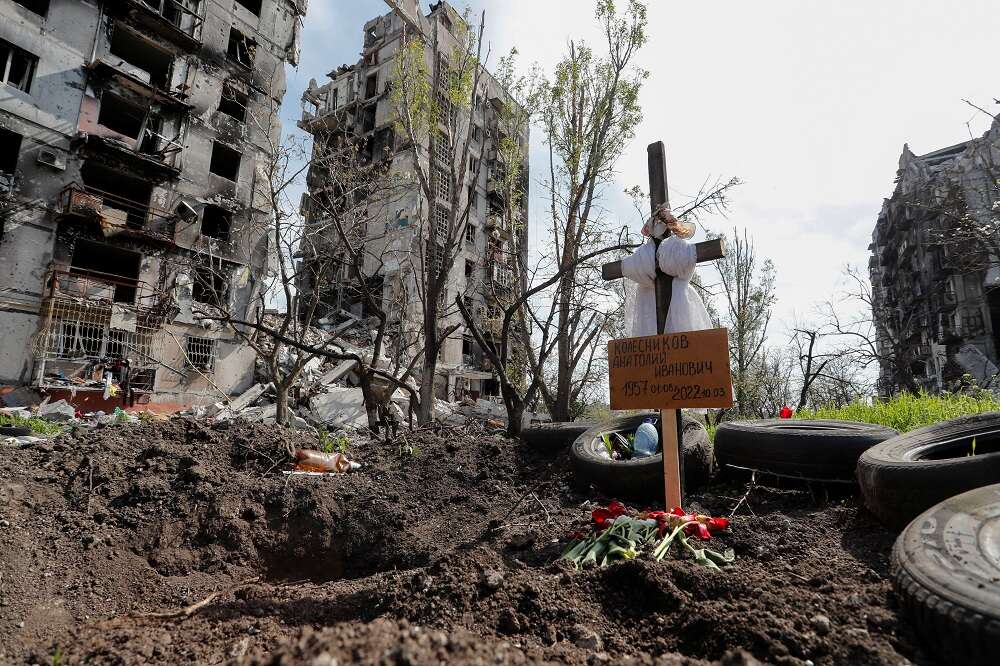 By Alessandra Prentice and Natalia Zinets

ZAPORIZHZHIA, Ukraine (Reuters) – Scores of Ukrainian civilians including women and children remained trapped on Thursday in underground bunkers at a steel works in the ruined city of Mariupol, although President Vladimir Putin said Russia was ready to allow them to leave safely.

Putin told Israeli Prime Minister Naftali Bennett in a phone call that Russia was still prepared to provide safe passage for civilians from the besieged Azovstal plant, and Kyiv should order Ukrainian fighters defending it to put down their weapons.

But a Ukrainian fighter who said he was holed up in the vast complex – the last part of the port city still in Ukrainian hands – accused Russian forces of breaching the plant’s defences for a third day in violation of an earlier pledge by Moscow to pause military activity to permit civilian evacuations.

“Yet again, the Russians have not kept the promise of a ceasefire and have not given an opportunity for the civilians who seek shelter … in basements of the plant to evacuate,” he said. Reuters could not independently verify his account or from where he was speaking.

Ukraine’s dogged defence of Azovstal has highlighted Russia’s failure to take major cities in a 10-week-old war that has united Western powers in arming Kyiv and punishing Moscow with sanctions.

In what would be a major historic shift sure to infuriate Moscow, Sweden and Finland may shortly decide to join NATO.

Russia’s military promised to pause its activity in Azovstal during Thursday daytime and the following two days to allow civilians to leave, after what Ukrainian fighters described as “bloody battles” prevented evacuations on Wednesday. The Kremlin said humanitarian corridors from the plant were in place.

However, nobody from Azovstal was among more than 300 civilians evacuated on Wednesday from Mariupol and other areas in southern Ukraine, the U.N. humanitarian office said.

Pictures released by Russian-backed fighters appeared to show smoke and flames enveloping the Soviet-era Azovstal complex. Ukrainian officials believe around 200 civilians remain trapped along with fighters in a sprawling network of underground bunkers there.

“It will take time simply to lift people out of those basements, out of those underground shelters. In the present conditions, we cannot use heavy equipment to clear the rubble away. It all has to be done by hand,” Zelenskiy said.

The U.S. Congress is debating an aid package for Ukraine worth $33 billion, largely for weapons. If it gets more supplies, Ukraine could launch a counter-offensive in mid-June, an adviser to Zelenskiy said.

Mariupol, a port city in southeast Ukraine on the Sea of Azov, is now under Russian control apart from the steel works, after a weeks-long siege. It has been an important target in efforts to cut Ukraine off from its coastal grain and metals export routes, as well as to link Russian-controlled territory in the east of the country to Crimea, seized by Moscow in 2014.

“God forbid more shells hit near the bunkers where the civilians are,” said Tetyana Trotsak, an Azovstal evacuee among dozens who reached a Ukraine-controlled town this week, describing her two-and-a-half hour walk to get across a short stretch of ground at the plant strewn with rubble.

Sweden and Finland, which shares a 1,300-km (820 mile) border with Russia, stayed out of NATO during the Cold War, but Moscow’s invasion of Ukraine has prompted them to rethink their security needs.

Putin embarked on the war partly to counter the expansion of the NATO alliance.

Sweeping sanctions from Washington and European allies have hobbled Russia’s $1.8 trillion economy, while billions of dollars worth of military aid has helped Ukraine frustrate the invasion.

In response, Russia said such intelligence sharing would not thwart its goals. The Pentagon and the White House did not respond to Reuters requests for comment on the report.

EU envoys are working to reach a deal this week on phasing out imports of Russian crude oil within six months and refined products by the end of this year. It requires agreement by all 27 EU governments.

The Kremlin said Russia was weighing responses to the plan.

Ukraine and Russia said fighting had been heavy across the south and east over the past day.

Ukrainian authorities reported shelling of towns near a frontline that divides territory it holds in the Donetsk and Luhansk regions from land held by Russian-backed separatists.

The Ukrainian air force said it had downed three Russian cruise missiles and four aircraft, including two Sukhoi fighter jets, while Russia said it had killed 600 Ukrainian soldiers overnight. Reuters could not independently either report.

Russia calls its actions a “special military operation” to disarm Ukraine and protect it from fascists. Ukraine and the West say the fascist allegation is baseless and that the war is an unprovoked act of aggression.

More than 5 million Ukrainians have fled abroad since the start of the invasion.

(This story refiles to reinstate dropped word ‘works’ in para 1)

(Reporting by Alessandra Prentice in Zaporizhzhia and Natalia Zinets in Kyiv; Additional reporting by Emma Farge in Geneva and Reuters bureaus; Writing by Frank Jack Daniel; Editing by Gareth Jones and Alexandra Hudson)