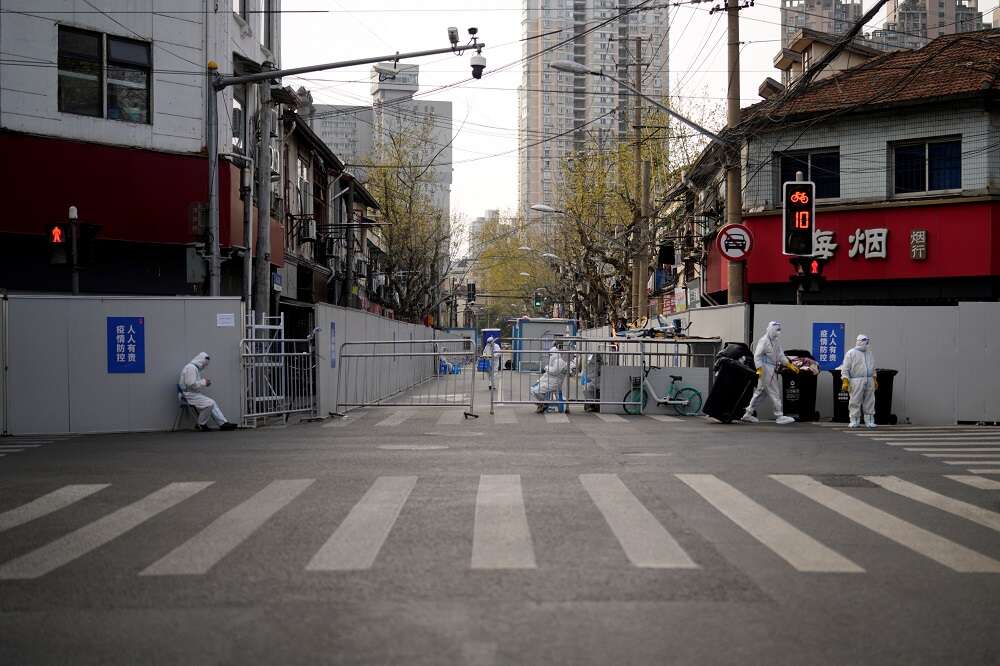 By Brenda Goh and Roxanne Liu

SHANGHAI (Reuters) -Authorities began locking down some western areas of Shanghai two days ahead of schedule, as new COVID-19 cases in China’s most populous city jumped by a third despite stringent measures already in place to try to stop the virus spreading.

Home to 26 million people, China’s financial hub is in the third day of a lockdown officials are imposing by dividing the city roughly along the Huangpu River, splitting the historic centre west of the river from the eastern financial and industrial district of Pudong to allow for staggered mass tests.

While residents in the east have been locked down since Monday, those in the west were previously scheduled to start their four-day lockdown on Friday.

Locking down a major metropolis like Shanghai full-scale would result in a 4% reduction in the national real gross domestic product, economists at the Chinese University of Hong Kong, Tsinghua University and other institutes estimated https://michaelzsong.weebly.com/uploads/4/8/1/4/48141215/truck_flow_and_covid19_220315.pdf in mid-March.

Several residents living in western districts on Tuesday received notice from their housing committees that they would be stopped from leaving their compounds for the next seven days.

“We will resume normal life soon, but in the next period of time we ask everyone to adhere closely to pandemic control measures, do not gather, and reduce movements,” said one housing committee notice seen by Reuters.

Meanwhile the city’s southwestern district of Minhang, home to more than 2.5 million people, said it would suspend public bus services until April 5.

Shanghai authorities told a press conference on Wednesday that since the lockdown began on Monday they had conducted 9.1 million nucleic acid tests.

They also said they planned to disinfect places such as office buildings, construction sites, wet markets and schools in a month-long campaign.

China’s “dynamic clearance” approach means it aims to clear all cases, and all people who test positive are sent to central quarantine centres or hospitals. Close contacts and neighbours must quarantine at home.

Many across the city have taken to social media to vent their frustrations in lockdown, posting videos and images of crowded quarantine centres and also issuing calls for help with medical treatment and purchasing food.

The lockdown has roiled auto production in the city and Chinese firms have halted a wave of planned domestic initial public offerings, filings show, as the current case surge has hampered due diligence and information gathering – affecting an estimated $9 billion-plus in fundraising.

Across mainland China, the daily numbers of new local infections in the past two weeks were much higher than those seen in the first two months this year, marking the biggest wave since the 2020 surge centred on Wuhan.

The eastern city of Xuzhou, which reported a total of less than 20 local infections in the past week, has imposed a three-day lockdown in most areas starting Wednesday.

The Xuzhou government said each household in those areas should only send one person to go out to shop for necessities every other day, while non-essential companies should either shut operations, have employees work from home, or operate in a closed-loop manner.

The National Health Commission (NHC) said on Wednesday China had built, or was in the process of constructing, 82 temporary hospitals across 46 cities. This is more than double the 33 temporary hospitals health authorities said the country had or was preparing eight days ago.

(Reporting by Brenda Goh and Roxanne Liu, additional reporting by David Stanway and the Shanghai Newsroom; Editing by Kenneth Maxwell and Raju Gopalakrishnan)

Russians bombard cities as losses force them back