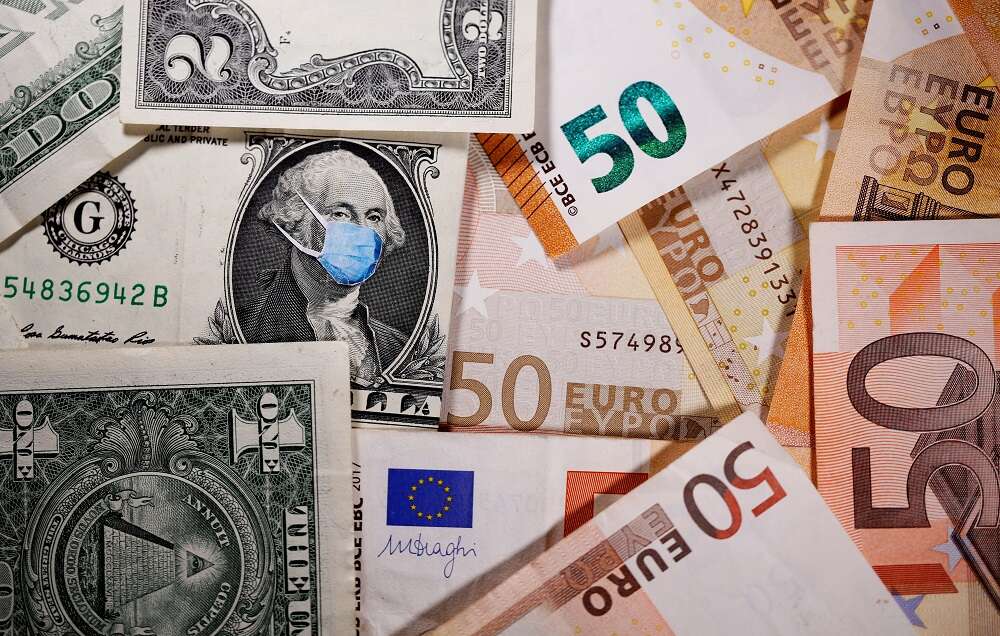 NEW YORK (Reuters) – The dollar retreated on Thursday from a three-month high hit late in the previous session, mainly due to strength in the euro after the European Central Bank set a new inflation target and as concerns grew over the spread of COVID variants.

Softness in the dollar continued after data showed the number of Americans filing new claims for unemployment benefits rose unexpectedly last week, an indication that the labor market recovery from the COVID-19 pandemic continues to be choppy.

“It’s an indication that if these numbers continue not to be anything stellar, or that weâ€™re not moving towards full employment, that leaves the Fed room to just take it easy and not necessarily think about a tapering timeline,” Juan Perez, senior currency trader at Tempus Inc, said of the data.

Minutes of the U.S. Federal Reserve’s June policy meeting released on Wednesday showed that while the economic recovery “was generally seen as not having yet been met,” Fed officials agreed they should be poised to act if inflation or other risks materialized.

The dollar index, which measures the greenback against six rivals, fell 0.5% to 92.25 from Wednesday, when it touched 92.844 for the first time since April 5. (Graphic on World FX rates) https://tmsnrt.rs/2RBWI5E

A Reuters poll expects the Fed to announce a strategy in August or September for tapering its asset purchases. While most predict the first cut to its bond-buying program will begin early next year, about a third of respondents forecast it will happen in the final quarter of this year.

The euro climbed across the board as investors dumped risky positions in currency markets in a broad-based unwinding by some hedge funds.

The single currency held on to earlier gains after the European Central Bank set a new inflation target on Thursday and claimed a role in fighting climate change after a strategy review that was widely expected by markets.

A weakness in U.S. technology stocks after the release of the Fed minutes widened to a broader sell-off in Asian stocks and renewed demand for government debt and safe-haven currencies. [GLOB/MKTS]

“This is a classic unwind of risky positions in currency markets with yield-chasing trades reversing and flows reversing from current account deficit countries to surplus nations,” said a trader at a U.S. bank in London.

The global spread of COVID variants add to the fear that there could be some disappointment in terms of economic growth in the coming months, said Mazen Issa senior FX strategist at TD Securities.

“While we are cautious in interpreting price action at a time of the year when liquidity is not as plentiful, we think markets are contemplating a potential growth scare as the Delta variant spreads and infections rise,” he said.

Yes, winning the Euros really can help your stock market

July 19, 2021
Editorial & Advertiser disclosureEditorial & Advertiser disclosureOur website provides you with information, news, press releases, Opinion and advertorials on various financial products and services. This is not to be considered as financial advice and should be considered only for information purposes. We cannot guarantee the accuracy or applicability of any information provided with respect to your individual or personal circumstances. Please seek Professional advice from a qualified professional before making any financial decisions. We link to various third party websites, affiliate sales networks, and may link to our advertising partners websites. Though we are tied up with various advertising and affiliate networks, this does not affect our analysis or opinion. When you view or click on certain links available on our articles, our partners may compensate us for displaying the content to you, or make a purchase or fill a form. This will not incur any additional charges to you. To make things simpler for you to identity or distinguish sponsored articles or links, you may consider all articles or links hosted on our site as a partner endorsed link.

Any cookies that may not be particularly necessary for the website to function and is used specifically to collect user personal data via analytics, ads, other embedded contents are termed as non-necessary cookies. It is mandatory to procure user consent prior to running these cookies on your website.