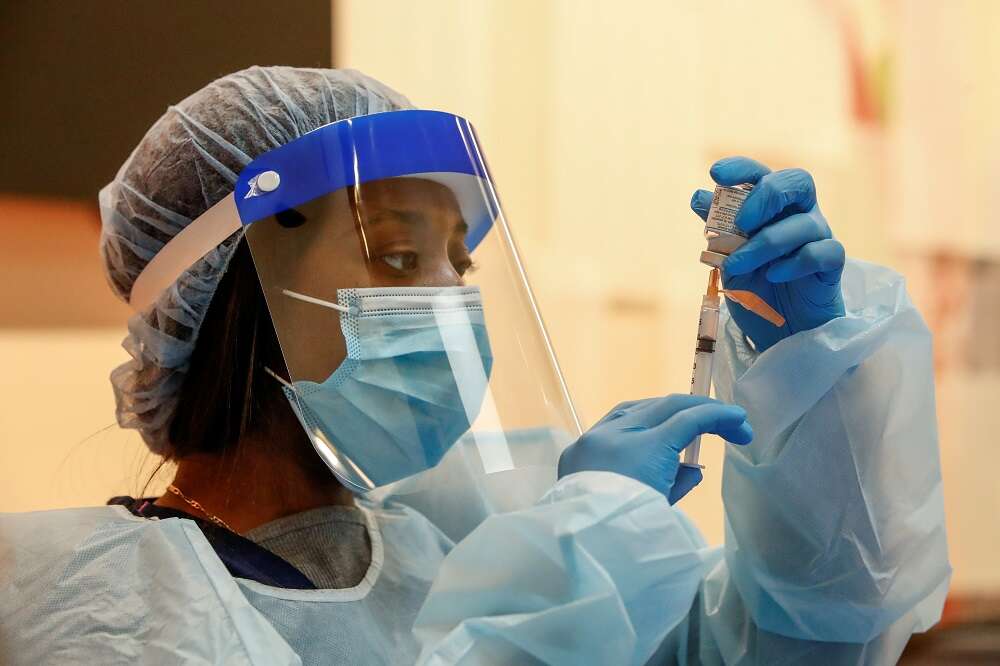 By Carl O’Donnell and Ahmed Aboulenein

U.S. officials are prepared to offer a third shot to Americans who completed their initial inoculation in two-dose COVID-19 vaccines made by Moderna Inc and by Pfizer Inc and BioNTech AG at least eight months ago, the Department of Health and Human Services said in a statement https://www.hhs.gov/about/news/2021/08/18/joint-statement-hhs-public-health-and-medical-experts-covid-19-booster-shots.html.

Initial booster doses will be given to Americans who received the two-dose vaccines, but U.S. health officials said they anticipate that people who received the single-dose Johnson & Johnson shot, the other COVID-19 vaccine approved in the United States, will also need boosters. The United States did not begin administering J&J shots until March.

The booster shots initially will focus upon healthcare workers, nursing home residents and older people, among the first groups to be vaccinated in late 2020 and early 2021, top U.S. health officials said in a joint statement.

There is mounting evidence that protection from the vaccines wanes after six or more months, particularly in older people with underlying health conditions. The officials cited this in their decision on boosters, but stressed that the U.S.-approved shots have proven “remarkably effective” in reducing the risk of severe disease, hospitalizations and deaths.

The officials included President Joe Biden’s chief medical adviser Anthony Fauci as well as the heads of the Centers for Disease Control and Prevention (CDC), the Food and Drug Administration (FDA) and the National Institutes of Health.

“The available data make very clear that protection against SARS-CoV-2 infection begins to decrease over time … and in association with the dominance of the Delta variant, we are starting to see evidence of reduced protection against mild and moderate disease,” the officials said.

“We conclude that a booster shot will be needed to maximize vaccine-induced protection and prolong its durability,” they added.

U.S. officials previously authorized a third dose of the vaccines from Pfizer/BioNTech and Moderna for people with weak immune systems.

In recent weeks, several other countries also have decided to offer booster shots to older adults as well as people with weak immune systems, including Israel, France and Germany.

Vaccinations have been widely available in the United States, unlike many other countries, but the highly infectious Delta variant has caused what experts describe as a pandemic of the unvaccinated as a significant number of people choose not to get inoculated.

The United States leads the world in reported COVID-19 cases and deaths. Daily U.S. cases soared from fewer than 10,000 in early July to more than 150,000 in August as the Delta variant took hold. The new cases include some vaccinated people, though they are far less likely to experience severe disease or death than the unvaccinated.

More than a million Americans independently sought an extra vaccine dose before the official decision on boosters was announced, according to federal data.

A study by an Israeli healthcare provider https://www.reuters.com/business/healthcare-pharmaceuticals/third-pfizer-dose-86-effective-over-60s-israeli-hmo-says-2021-08-18 released on Wednesday found that a third dose of the Pfizer/BioNTech shot is 86% effective in people over age 60.

It followed another Israeli study released this week that showed evidence of waning immunity from COVID-19 vaccines in the months after inoculation, raising the risk of serious infection among the elderly and people with compromised immune systems.

“The surprise factor is the vaccine vulnerability – people who are vaccinated became vulnerable much earlier than expected,” Dr. Eric Topol, a cardiologist and director of the Scripps Research Translational Institute in California, said about the study.

“The whole dynamic of boosters is being rewritten,” Topol added.

The U.S. announcement goes against guidance from the World Health Organization, whose chief scientist said on Wednesday current data does not indicate the need for booster shots. A WHO adviser said vaccine doses should first go to people in poorer countries who have not yet received an initial inoculation.

The decision represented a shift from the optimism of U.S. health authorities in May in curbing the pandemic when Biden set a goal to vaccinate 70% of American adults with at least one dose by July 4. That goal was achieved about a month late.

The U.S. booster plan is dependent on the FDA determining that a third dose of the two-dose vaccines is safe and effective, and a favorable recommendation from CDC advisers.

(Reporting by Carl O’Donnell in New York and Ahmed Aboulenein in Washington; Editing by Will Dunham and Grant McCool)

Ryanair hits back at Italian authority over seat surcharges