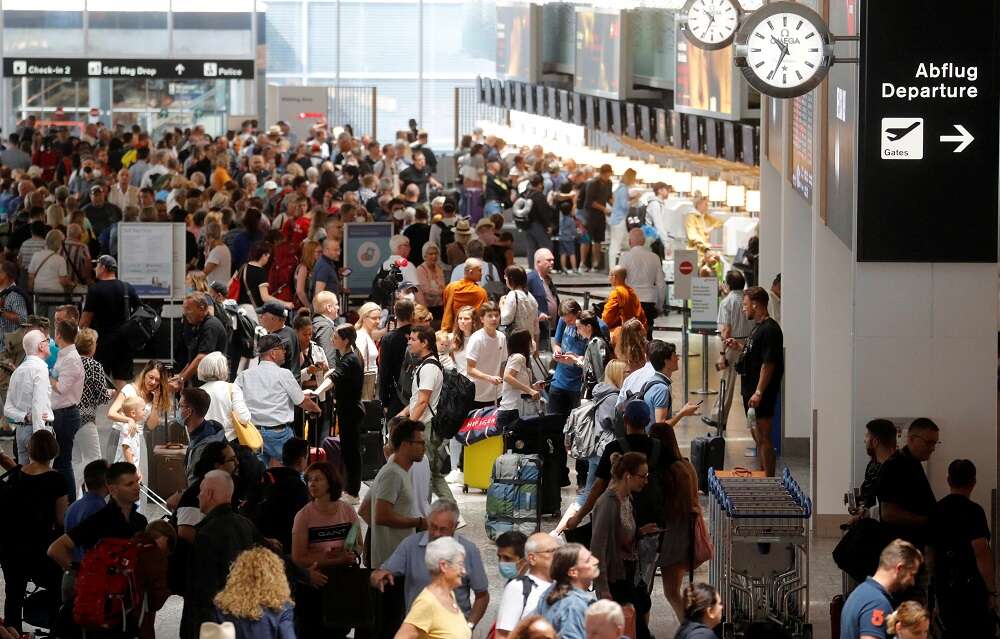 Here is a summary of some of the key developments:

After sweeping job cuts and pay cuts when COVID-19 brought travel to a grinding halt, staff across the industry from pilots to baggage handlers are asking for big pay increases and better working conditions.

Norwegian Air in June agreed a 3.7% pay rise for pilots among other benefits, in a sign of what other airlines may have to offer to avoid labour strife..

Scandinavian carrier SAS and Ireland’s Ryanair in July agreed terms with some unions representing their pilots, while British Airways and KLM signed wage deals with ground staffers, as strikes affected hundreds of thousands of travellers in the key holiday period.

Portugal’s civil aviation workers on Aug. 1 threatened to go on strike on Aug. 19-21, a usually busy summer weekend for travel. Two unions representing workers accused airport operator ANA, which manages 10 airports in Portugal including in Lisbon, Porto and Faro, and French group Vinci, which controls ANA, of making multi-million euro net profits but not paying decent wages to their workers.

Pilots at the German flagship carrier voted on July 31 in favour of industrial action. Pilots union VC’s board member said the vote did not necessarily mean a strike would happen and that they were ready to negotiate. Lufthansa said on Aug. 1 that negotiations to solve the pay dispute were ongoing.

VC is demanding a 5.5% pay rise this year for its pilots and automatic inflation compensation thereafter.

Lufthansa was already rocked by a ground staff strike on July 27, which forced it to cancel more than 1,000 flights. The Verdi union is demanding a 9.5% pay hike for around 20,000 workers and warned more industrial action could be on the cards.

Ryanair’s Spanish cabin crew union members plan to strike four days a week until January to press demands for higher pay and better working conditions, the USO union said on July 27. The strike action, also backed by Sitclpa, will take place from Monday to Thursday every week from Aug. 8 to Jan. 7.

Ryanair workers also caused disruption at many Spanish airports during July, when they walked out for several days, mainly on weekends.

Spain-based pilots at Easyjet said on July 29 they would strike for nine days in August. The pilots will strike from the bases in Barcelona, Malaga and Palma in Mallorca.

Meanwhile, Spain-based cabin crew suspended their strike planned for July 29-31 after it reached a deal with the company. The workers went into strike previously in July, first on July 1-3 and again on July 15-17, which caused some flight cancellations and delays for the budget airline.

Airlines, including Lufthansa, British Airways, easyJet, KLM and Wizz Air, have cut thousands of flights from their summer schedules to cope with the disruptions, while major airports including London’s Heathrow and Amsterdam’s Schiphol capped passenger traffic.

British Airways on Aug. 2 halted ticket sales on flights to domestic and European destinations from Heathrow until Aug. 8 after the airport’s request to limit new bookings.

On Aug. 2, Schiphol said the passenger cap it introduced earlier for the summer season to cope with long waiting times and other logistical problems would be extended into September and October.

Airports and airlines are scrambling to hire more workers from pilots to security and border control staff and baggage handlers after many left during the COVID-19 crisis.

Industry executives say it is hard to recruit for often physically demanding, relatively low paid work at airports often located out of town. Training new hires and getting them security clearance to work at airports also takes months.

One of Europe’s busiest airports needs to hire 500 security staff. It currently has 58,000 workers at and around the airport, 10,000 fewer than before the pandemic.

** Charles de Gaulle and Orly airports in Paris need to fill 4,000 jobs mainly in security, maintenance and travel retail, according to airport operator Groupe ADP and the CDG Alliance.

More than 20,000 people were laid off at Charles de Gaulle during the pandemic, according to the CGT union.

Airport security company ICTS, which operates at Charles de Gaulle, is offering a one-off 180-euro bonus to those delaying their vacation until after Sept. 15 and 150 euros for staff who sign up new recruits, according to a CGT union representative.

** Frankfurt Airport, Germany’s busiest hub, has rehired nearly 1,000 ground services employees after cutting about 4,000 during the pandemic, but will continue to see disruptions due to lack of workers in the next two or three months, its operator Fraport has said.

According to the ADV airport association, about one in five jobs in security, check-in and aircraft handling is unfilled at German airports.

August 19, 2022
Editorial & Advertiser disclosureEditorial & Advertiser disclosureOur website provides you with information, news, press releases, Opinion and advertorials on various financial products and services. This is not to be considered as financial advice and should be considered only for information purposes. We cannot guarantee the accuracy or applicability of any information provided with respect to your individual or personal circumstances. Please seek Professional advice from a qualified professional before making any financial decisions. We link to various third party websites, affiliate sales networks, and may link to our advertising partners websites. Though we are tied up with various advertising and affiliate networks, this does not affect our analysis or opinion. When you view or click on certain links available on our articles, our partners may compensate us for displaying the content to you, or make a purchase or fill a form. This will not incur any additional charges to you. To make things simpler for you to identity or distinguish sponsored articles or links, you may consider all articles or links hosted on our site as a partner endorsed link.